What would you say if we told you that there is one single nerve that controls multiple organs such as the heart, oesophagus,  stomach, lungs, liver,  kidneys,  intestines… and so much more?

The cranial nerve X -nerve number 10 of the 12 cranial nerves- , also known as the vagus nerve, is the longest nerve in the body (see image below) and forms part of the involuntary nervous system.

Although we use a singular term, the vagus nerve is actually paired, with two branches extending throughout the whole body, on the left and the right sides. It is the captain of unconscious body procedures, such as keeping the heart rate constant and enabling food digestion. 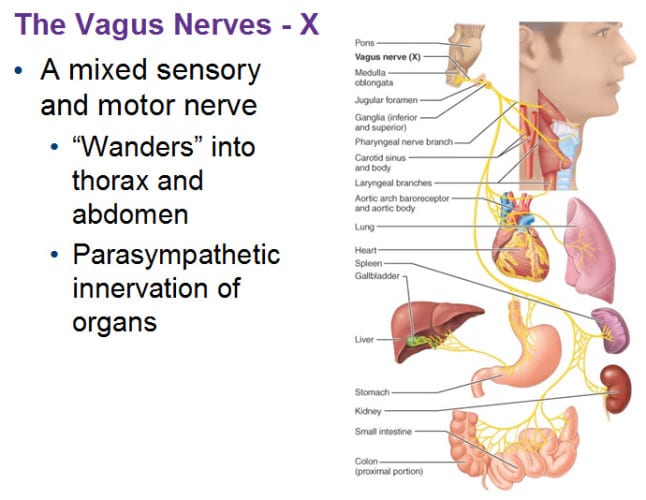 With thanks to Subtle Yoga

It is easy to see why the “Vagus” nerve was given its name: “vagus” means “wandering”, as it reaches practically all the areas responsible for the main functions of the body.

This long nerve has been the centre of attention lately: electrical stimulation of the vagus nerve is not only being used as a treatment for epilepsy and for depression which doesn’t respond to therapy, but researchers are also currently studying vagus nerve stimulation as a potential treatment for a variety of conditions, including multiple sclerosis, headache, chronic pain and Alzheimer’s disease.

The vagus nerve has been linked to Roemheld syndrome, when the accumulation of  gas in the stomach presses against the heart and the vagus nerve, causing a variety of scary symptoms such as heart palpitations, difficulty in  breathing, chest pain and dizziness. These symptoms, which can make the sufferer think that he or she is having a heart attack, can be easily relieved by…you’ll never guess: burping.

Such is the power of this nerve, that a little pressure on it can be reason for spending a few hours in ER, until of course they work out that there is nothing wrong with your heart.

Some doctors even recommend their patients who suffer from harmless heart palpitations to “massage’ the area in the neck where the vagus nerve runs along, in order to slow down the heart beat.

The vagus nerve is responsible for so many  functions that it would be impossible to mention them all, so here is a quick list that will give you an idea of the important areas that it covers:

The vagus nerve is also involved in one of the most common causes of fainting, called vasovagal syncope. This is an overreaction of the body to certain stimuli, like the sight of blood, which involves the stimulation of the vagus nerve. This stimulation causes a drop in blood pressure and heart rate. Less blood flows to brain, resulting in loss of consciousness. In most cases, vasovagal syncope does not require treatment.

The more we learn about it, the more we realize we need to take this nerve seriously. Damage to the Vagus nerve can cause a number of serious symptoms such as heart palpitations, difficulty swallowing and breathing, impaired digestion (Gastroparesis), voice loss, chest pain, hearing loss, increasing production of stomach acid (which can result in peptic ulcer), dizziness, insomnia and incontinence.

Damage can be caused by high consumption of alcohol, diabetes, upper respiratory infections, accidents and surgery (affecting the relevant organ).

The reason why there is so much talk going on about the Vagus nerve lately is because research has found that stimulation of this nerve through various techniques has shown to slow down heart rate, stimulate digestion and induce a good night sleep. In other words, Vagus nerve stimulation  is used as a treatment of the symptoms of stress and to induce relaxation.

Not surprisingly, one of the natural techniques currently being researched for the stimulation of this vital nerve is Yoga and chanting. The breathing forms of yoga -more in particular slow abdominal breathing– and the deep stretches involved in some of the poses have shown positive results on the “vagal tone”, with all its beneficial effects.

Chanting and singing are also being studied for their calming results, specially the vibrating OM sound, although singing out loud in the shower might have similar effects.

Other natural forms of stimulating the Vagus nerve are:

There is still much to be learned about this amazing wandering nerve, but in the meantime, cold showers in the morning singing at the top of your voice, followed by stretches and deep abdominal breathing, might be exactly what your nerves are asking for.